Charlie Poste - Jockey of the Month

A Leamington Spa residential and lettings agency is riding high after its sponsored jockey was crowned Jockey of the Month following a triumphant win at Warwick Racecourse. 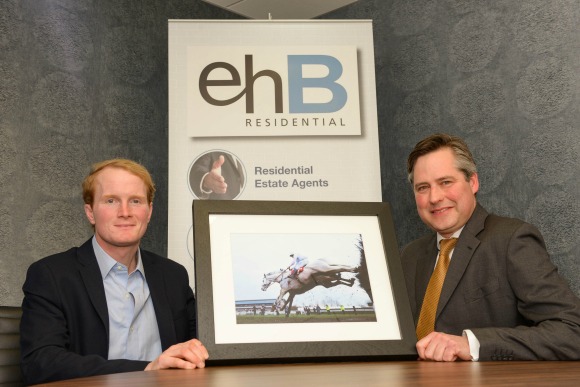 Warwickshire Jockey Charlie Poste, who is sponsored by ehB Residential, defied the odds to hurtle towards a 20-1 success and win by three and three-quarter lengths in the Betfred Classic Chase.

The brilliant win happened on board Russe Blanc and was almost thwarted after a loose horse running wide on the course saw Poste’s saddle slip during the £60,000 race – which is Warwick’s biggest.

Now Charlie’s cool handling has seen him awarded the prestigious Stobart Jockey of the Month title, after his determined battle for victory was recognised by the public who voted for him to receive the accolade in collaboration with Channel 4 Racing.

The success at the prominent long distance race is one that Charlie is confident will put him in good stead for the rest of the season.

He said: “Although I have already had around five successes at various races this year, to have won the Classic Chase is a significant achievement as historically it has been won by some very good horses.

“Currently, weather permitting, I am racing most days so I am hoping the Warwick Racecourse win will set the trend for the rest of the season as I prepare for more high profile races including Ascot and the Cheltenham Festival.

“To have received national recognition from public the UK over for the victory is really the icing on the cake of the season so far – it is so rewarding to see everyone’s hard work come to fruition.

“ehB Residential is now in its third season of sponsoring me which is a great reflection of the close relationship we maintain with each other. The team continue to be a great source of support not just in terms of sponsorship but also in consistently attending races to lend their backing.

“The three mile handicapped chase at Warwick receives televised coverage which helped to raise ehB’s profile, and after being crowned Jockey of the Month I look forward to working towards more wins over the rest of the season to continue promoting their name.”

Edward Bromwich, managing director of ehB Residential which has offices in both Leamington Spa and Warwick, said: “Charlie has been a consistently good jockey throughout the three seasons we have sponsored him, which has seen ehB’s brand receive coverage across a range of both local and national television and press.

“The success at Warwick Racecourse – despite the odds being stacked against him – was a fantastic win and it is great to share in his success. We look forward to continuing to support him over the course of the rest of the season and beyond, with hopefully plenty more wins.”

"Hi Chris Jonathan and I just wanted to say thank you for all your hard work in the sale of 21 Hyde Place. Everything went so smoothly from start to finish and we were very impressed with EHB throughout. We felt that your marketing, approach to the sale, communication and correspondence was brilliant - its a shame you don't have an office in the North East so we can use you again! Many thanks to you and all the team. All the best for the future Kind Regards Sarah and Jonathan "
Sarah and Jonathan