The Mayor of Southam cut the ribbon to officially open a new housing development in the town. 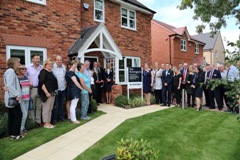 Councillor Mike Brooks and Mayoress Hilary Brooks were the guests of honour at the official launch of Bloor Homes’ Southam Grange development on Banbury Road.

Local VIPS turned out in force for the event, which took place on Friday 9th September, with representatives from Galanos House, Southam United and Spratt Endicott solicitors among those in attendance.

The event began with a tour of the new showhome before the Mayor gave a short speech about the local area and the benefits the development will deliver to the community.

She said: “It was an absolute pleasure to welcome our guests to the official launch of our Southam Grange development and we were delighted that the Mayor and Mayoress found time in their busy schedules to attend the event.

“In his speech the Mayor talked about the significant investment which we are bringing to the town, and he seemed extremely impressed with the homes we are building at the development.”

As well as providing 235 new homes in the town, the development will also deliver a new sports and community hub, which will include a new stadium for Southam United Football Club, bowling green and pavilion.

In addition, Bloor will be providing funding of around £1.5 million for local services and infrastructure, including contributions for education, bus service improvements, libraries and public open spaces.

The developer was also one of the sponsors of Southam College’s Eco Club Nature Reserve, which opened earlier in the summer.

A range of three and four-bedroom houses are currently available at Southam Grange, priced between £290,000 and £410,000.