An exclusive development of individual apartments in Leamington Spa has sold out in just four hours. 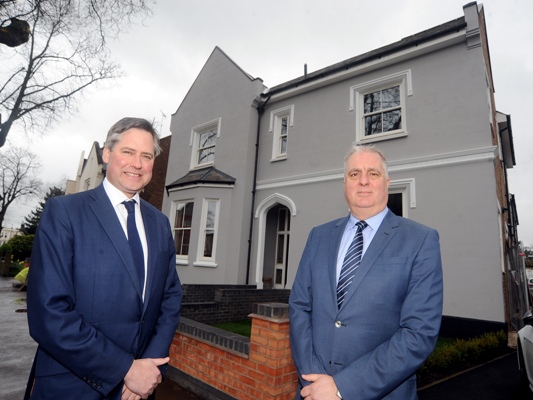 Property agent ehB Residential sold all of the apartments at the new Park House development, in Avenue Road, in the first four hours of an open weekend.

The scheme, developed by Warwick firm, Space GK, comprises of eight one and two bedroom apartments, including two duplexes and one rooftop penthouse.

The apartments were priced between £195,000 and £380,000 and were all snapped up by private buyers. Edward Bromwich, of ehB Residential, said that the high specification and the attention to detail on every aspect resulted in the development being extremely successful.

“We have been working in partnership with Space GK managing director Gary Kedgley and his team since the start of the project,” said Edward.

“They have not only created eight high-quality apartments, but they have also put a lot of work into restoring the building’s architectural character. This has been achieved by looking at old photographs to return the building to its former self while ensuring it compliments other buildings in Avenue Road.

“The developer has combined the very high specification and attention to detail throughout, considering what features are important to potential purchasers such as built in appliances to increase worktop space and  basement storage.

“Leamington Spa has a thriving property market, with a particular demand for high quality homes, and this was demonstrated by the ability to sell all of the apartments in such a short space of time.”

The first apartments are due to be completed in the coming weeks and the whole development will be finished early April.

Gary Kedgley added: “We have brought this building back to life, transforming the exterior so that it complements the street scene while creating individual high specification, contemporary apartments.

“I have worked in partnership with Edward from day one of this project and we have been able to adapt and tailor the apartments to meet the needs of the area.

“Leamington is a highly sought after location, and the high specification of the apartments combined with the expertise of ehB Residential led to all eight apartments being sold in a very short time.

“We will now strive to take on similar projects in the area with the same attention to detail, while creating high-quality modern homes and maintaining the history of the property.”

"To all the staff at ehB. Thanks for all your hard work and help with my house sale. Very best wishes."
Mrs G Burns