Sponsorship for Claverdon Under 14's

With the season getting underway Claverdon under 14’s make a statement  with the presentation of  their new kit. Edward Bromwich of ehB, who has been long involved with Claverdon , was there with Wasps full back Rob Miller to present the kit to the players. 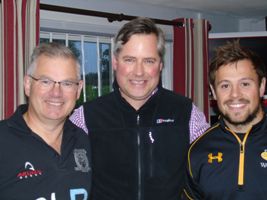 Simon Waterworth Claverdon U14 coach expressed his thanks to eHB and to Rob for their support of the club.  Rob encouraged the team to work hard and stay together as he had developed himself through his local club and benefited hugely from the experience.  Claverdon’s Under 14’s had a very successful season last year with many  of the squad also playing for Worcester, Wasps and South Warwickshire.  The squad is small however and Claverdon welcome any new players of all abilities.  The season has an exciting fixture list ahead and through joining Claverdon you are guaranteed plenty of training and game time along with a full agenda of events off the field.  For example this coming weekend the squad stay at Hatton Country World for a boot camp which includes a parent’s vs lads Laser Quest battle.  Visit the website to learn more about Claverdon RFC.