A Warwickshire residential property firm is making its mark at Claverdon Rugby Football Club by renewing its sponsorship of the junior and mini teams.

ehB Residential, which has offices in Warwick and Leamington, has pledged its support for the young rugby players for the third successive season.

Around 170 youngsters, aged between four and 14, will take to the pitch with the firm’s name emblazoned across their jerseys as they try to harness the excitement of the Rugby World Cup while competing against other youngsters in the region.

Claverdon Rugby Club was founded in 1964 and has established strong mini and junior sides alongside two senior teams.

Edward Bromwich, managing director of ehB Residential, said: “We are very proud to be supporting Claverdon Rugby Club and hope that the new kit will inspire the young rugby players to have a fantastic season. With Rugby World Cup fever in full swing, it is the perfect opportunity for clubs such as Claverdon to strengthen the sport at a grassroots level and entice more young people to get involved in the game. Both Mark Wade, who is a director at ehB Residential, and I have children who play for the minis section of the club and we have witnessed first-hand the fantastic coaching they receive. Not only are they taught the skills of the game, it is also a great way for them to keep fit, make new friends and learn about key values which can be transferred to other aspects of their lives. We are therefore delighted to be able to give back to the local community and support the children over the next few seasons.” 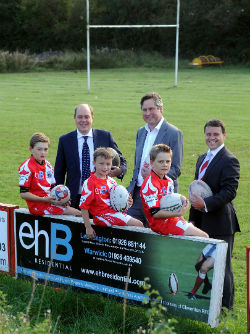 Chris Bown, mini’s chair of Claverdon Rugby Football Club, said he was extremely grateful for the firm’s continued support of the growing mini’s section of the Club.

“We are pleased to be able to promote the firm within the local area and hope to see the ehB Residential name touching down under the posts week after week”, he said. “All of the children are really excited about their new kit and couldn’t wait to try it on at the start of the season. It is a great year for ehB Residential to be supporting the young players. Not only have we witnessed strong growth in our junior and mini sides, there is also added excitement in the air as the children watch their rugby heroes take part in the Rugby World Cup.”

"We have been delighted with the excellent letting service that Rachel and the ehB team have provided to us."
Alastair