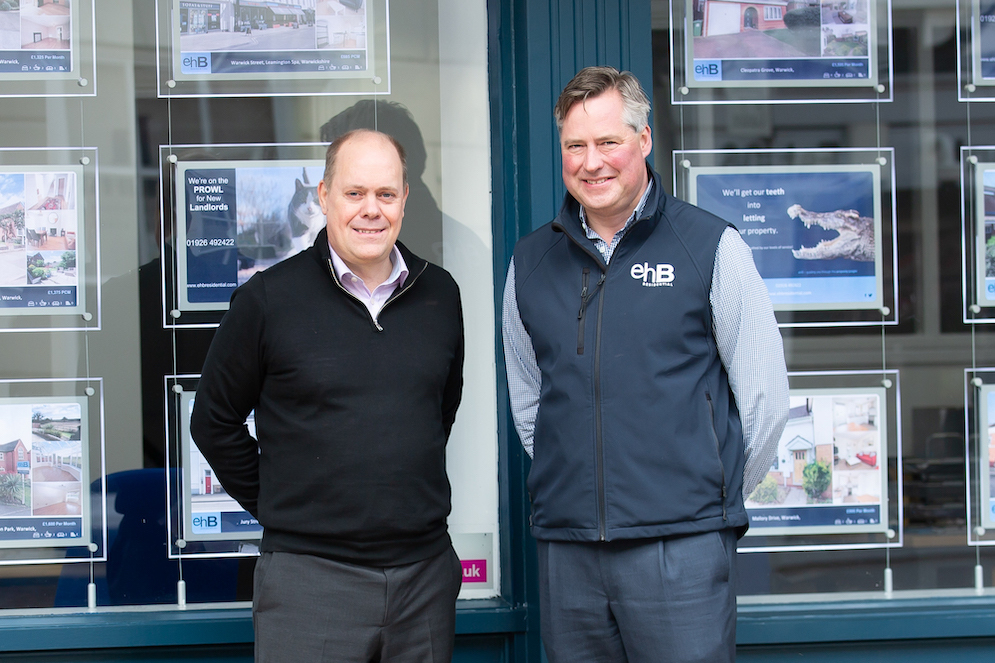 A pair of long-established independent Warwick estate agencies have joined forces to create two new property hubs in the town centre, with ehB buying Donald Carter after more than half a century in the town.

ehB Warwick Ltd has completed the purchase of the agency from its founder’s son, Simon Carter, who is retiring after many years in the profession.

The purchase means ehB now has twice as many rental properties on its books and has seen a boost in the number of homes available for sale across the town and in the surrounding villages.

ehB will retain the Donald Carter offices, which are conveniently and coincidentally next door to its own premises, ensuring a seamless transition for the public.  Each will have its own identity, with Donald Carter’s former premises rebranded as ehB Warwick lettings hub, while the existing ehB office will become ehB Warwick sales hub.

Both will be run by ehB Warwick director Mark Wade, who has been with ehB for 12 years and has nearly 30 years’ experience in estate agency.

Both businesses were founded by the fathers of the current or recent directors – with ehB, under its earlier incarnation of Peter Bromwich, created by the eponymous father of current MD Edward Bromwich back in 1975, while retiring Simon Carter’s father Donald set up his business in 1965.

Edward Bromwich said; “Both businesses not only have similar backgrounds by being privately owned family firms, but also similar ethics and a determination to remain independent. The new, bigger operation will continue to combine traditional values with a modern outlook – with all the latest technology available to help streamline the sales and lettings process. We straddle the best of both worlds – the gravitas, experience and longevity of our team with a refreshing up to date approach.”

Mark Wade added: “We’re very excited about this expansion and the fact that we will have even more choice to offer our customers. To make life easier and clearer for our buyers and renters, one office will specialise in rentals and property management and the other one sales.”

"Dear Scott, Chris and everybody at ehB Residential. Thank you very much for all the hard work on our purchase and sale. You do give a wonderful service and we really do appreciate your input and communication skills in making the above happen smoothly. Best wishes."
Frank and Ann