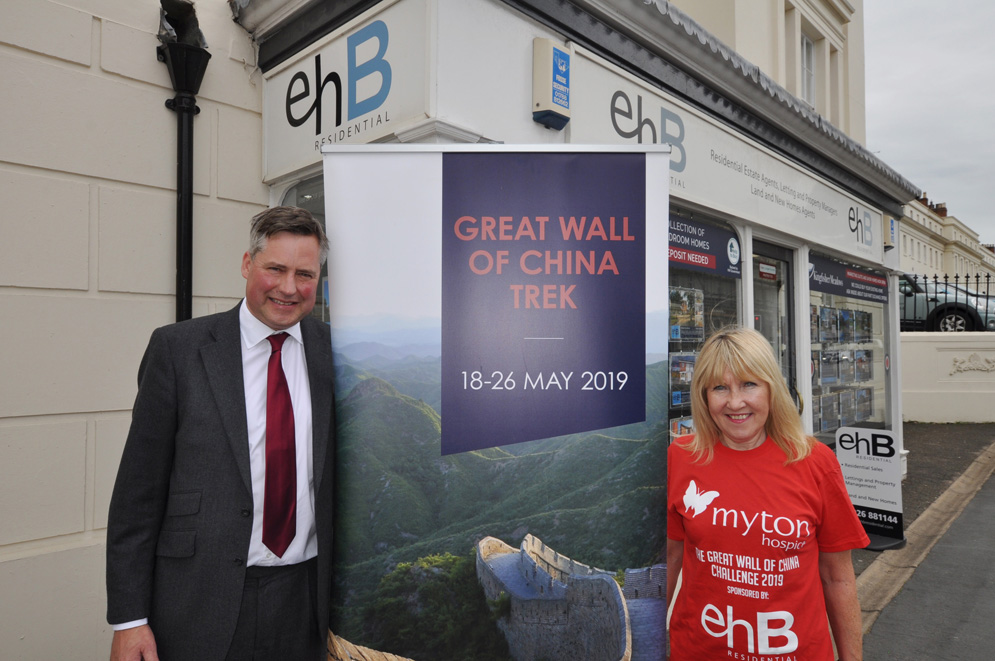 A Leamington dog walker has just returned from walking part of the Great Wall of China to help raise money for Myton Hospice in memory of her mother-in-law and a great friend.

Ann Akerman has nearly reached her £4,000 target with help from a range of sponsors – including a donation from Leamington estate agency ehB Residential.

She proudly sported a Myton Hospice T-shirt emblazoned with the ehB Residential logo for part of the trek.

Ann, who has worked with the ehB Residential team over a number of years, completed the 36km walk in 41 degrees in the company of around two dozen other walkers, aiming to raise £42,000 between them to run the Warwick inpatient unit for a week.

Ann lost her mother-in-law in 2010 and she wanted to thank the hospice for its part in helping her during her illness.

“Myton Hospice is very close to my heart. She was cared for by a team of wonderful doctors and nurses and we saw the care and support given to us all at a very difficult time.”

And her friend Alison Fitzgerald lost her fight against cancer a year ago.

“The trek is one of the best things I’ve ever done and I have some great memories that will live with me forever. The support and sponsorship of all the donors and of ehB is massively appreciated.”

Edward Bromwich, MD of ehB Residential, is an enthusiastic supporter of the hospice, which is particularly close to his heart as he and his family have had first hand experience of cancer.

“The hospice does some amazing work, and we wanted to do what we could to help Ann in her fundraising efforts,” he explained.

The trek is one of a number of fundraising activities run by Myton Hospices which needs to raise £9.2 million this year to keep its services running. As well as its centre in Warwick, it operates in Rugby and Coventry and supports patients and their families in the community.

Anyone wishing to donate can do so via http://www.justgiving.com/Ann-Akerman

"Dear Mark, Ros and Wendy. Many many thanksÂ for the help with the sale of our property at The Furr Marsh. We wouldn't hesitate to recommend your services to our friends and colleagues."
Rich and Deana