The entrepreneurial skills of Leamington youngsters are being put to the test to help raise funds for their school. 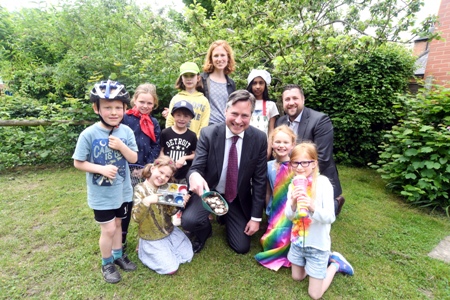 Pupils at Milverton Primary School are coming up with ingenious ideas of how they can generate money to invest in new computer equipment and they have been given a helping hand by ehB Residential.

The Greatheed Road-based school has launched the Grow a Pound initiative, which saw every child sent home with £1 and tasked to come up with ways to increase it.

The scheme was the brainchild of the Friends of Milverton Primary School (FOMPS), who then called on ehB Residential, and its team was only too happy to help.

They donated £320, and then contacted the estate agent’s charity Agents Giving to see what it could do.

Agents Giving works with estate and letting agents and their suppliers across the UK to encourage and support their fundraising activities.

The organisation decided to match fund the amount donated by ehB Residential – boosting the total to £640.

Edward Bromwich, managing director of ehB Residential, said: “We have worked with Milverton Primary School for a number ofyears now and we were more than happy to get involved with the Grow a Pound scheme.

“ehB is firmly rooted within the community, so it is important that we give something back and this innovative scheme is a fantastic way for pupils to get creative and have fun at the same time.

“We were extremely pleased that Agents Giving could also get involved and double the money that was handed over and I know this will come in very useful.”

Pupils have a month to get to work and some already have plans for a bake sale, a sponsored cycling event, car washing and a whole lot more.

“We came up with the Grow a Pound idea as the school’s computers are getting a little old and tired,” said Kate Beckingsale from FOMPS.

“The staff would like iPads for the classrooms, so Grow a Pound is a way for the children to get involved and host their own individual events.

“They have already come up with some great ideas and we will be handing out prizes at the end of June in a special awards ceremony.”

Matthew Fisher, headteacher at Milverton Primary School, added: “We would like to say a huge thank you to ehB Residential for their support and also Agents Giving for match funding the money.

“The children have already come up with some brilliant ideas and we look forward to seeing how much they raise.”

"As a Relocation Agent ehB are often the first call we make. They have high quality rental properties and Gayl and Rachel provide a very professional, friendly and reliable service. We wouldn't hesitate to recommend them. Kind regards."
David