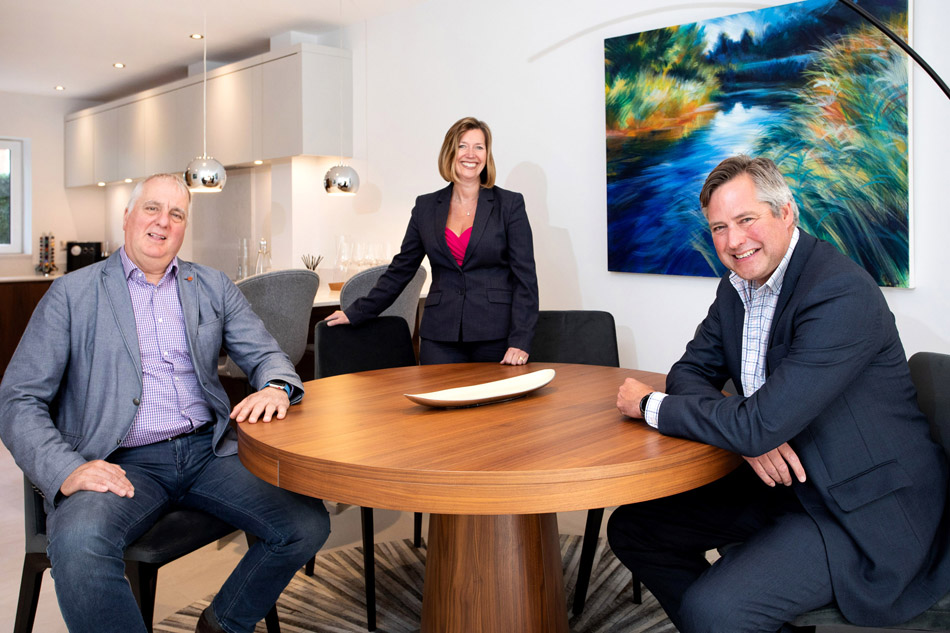 In a town famed for its Regency architecture, an open day next weekend is offering the chance for style seekers to experience something at the opposite end of the design spectrum.

Each home at Victoria Court in Kenilworth Road offers well over 2,500 sq ft of space over four floors and an open plan living area blending seamlessly into an easy to maintain walled balcony garden via full width bi-fold doors.

The unusual contemporary properties have been created by Warwick developer Space GK, which recently converted the original 19th century building to which they are attached into two dramatic duplex apartments and a penthouse.

Space GK’s architects, who are entering the development for a design award, have created light and space with strategic use of windows and glass.

One further town house has already been sold and developer Gary Kedgley will be moving with his family into a fifth, detached property in the grounds.

Gary, who has worked all over the world for several decades, says his global travels have inspired the designs.

“I’ve lived in Denmark where open plan living like this and popping out to cafes on the doorstep is a normal way of life. These houses are such a contrast to the traditional architecture of Leamington.

“I was interested to see how we could blend the history of the town with a modern, continental way of living. I’m fascinated by architecture and history and how buildings can evolve and be changed from their original purpose to suit how we live now.”

As well as his travels informing his architectural decisions, Gary has also played a role in the interior design element of the build.

“I’m not a designer at all – but I did find some incredible paintings when I was in Cuba. So the interior designer has used those to decorate the show home. They have an immediate impact in the same way that the houses do.”

His is very much a family operation – with his GP wife Helen and solicitor brother-in-law Neil working alongside him in the business.

In fact, Victoria Court played a pivotal role in Helen’s career choice. Her mother was a nurse there in its earlier incarnation as a retirement home – and sometimes the siblings played in the garden as children.

“Helen was so inspired by her mother’s passion for looking after people that she decided to become a doctor,” explained Gary.

There is no sign of the building’s previous existence now – but it is interesting to reflect that Leamington’s original purpose as a venue for people to come and take its healing waters has somehow come full circle – with its newer residents finding its coffee bars and parks have similarly restorative properties.

The townhouses are being jointly marketed by ehB Residential in Leamington and Stratford’s Peter Clarke.

Viewing slots, between 11am and 3pm on Saturday September 12, can be booked via edward.bromwich@ehbresidential.com, homes@peterclarke.co.uk or on 01926 870145.

For Covid-secure reasons, booking ahead is preferable, but last minute visitors may possibly be accommodated as all three homes will be open and the event will be manned by a team armed with masks and sanitiser.

"Hi Chris On behalf of Iain and I we would like to say a big thank you, to yourself and the team for all your help and support selling our house in Campion Green. We love our New House!! All the best Kind regards Fiona & Iain "
Fiona & Iain