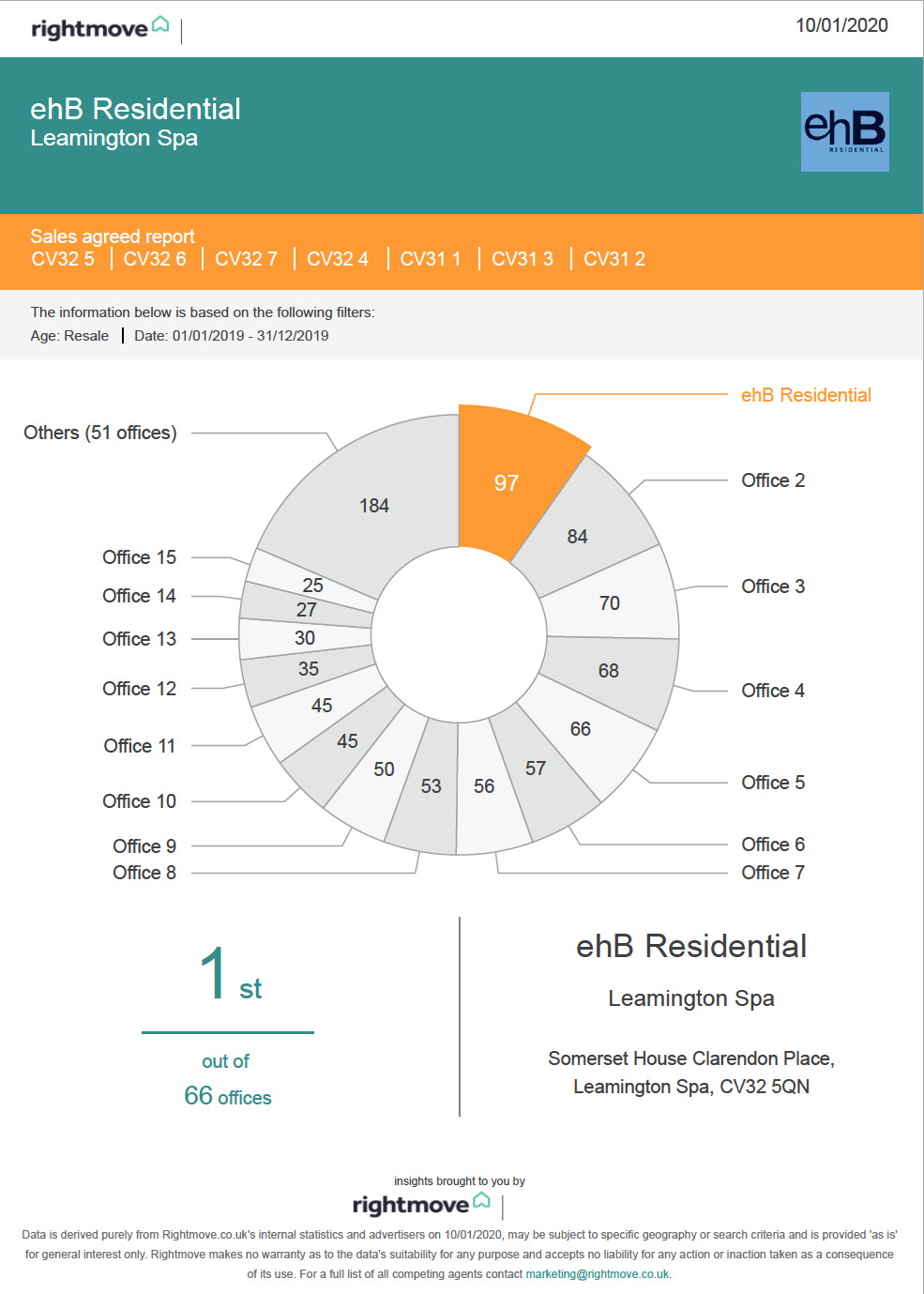 ehB Residential was the number one selling and listing estate agency in Leamington postcodes CV32 and CV31 for the whole of 2019, according to property portal Rightmove.

The website’s research* shows ehB came first for new instructions out of 92 agencies listing second hand homes for sale in the two postcode areas. It also beat off competition from 65 other outlets to take pole position for sales agreed across the whole of the last 12 months.

The agency listed 136 homes for sale in CV31 and CV32 between January 1 and December 31 and agreed sales on 97 within the same timeframe. Its nearest competitors in each of the two categories listed 120 properties and agreed sales on 84 respectively. The statistics exclude new builds.

The news that ehB has been named the town’s number one agency follows both a successful autumn and a record August.

ehB agreed more sales in October, November and December 2019 than in the same period in 2017 and 2018. And in August it sold more than twice as many homes than it did in the same month in the preceding year.

As the ehB team achieved such success against a backdrop of political and economic uncertainty, office manager Clive Thompson says he is optimistic about the market in 2020.

Indeed, latest forecasts from various property experts predict a modest price growth in 2020 across the UK. RICS (The Royal Institution of Chartered Surveyors) forecasts a 2% rise countrywide, while Savills believes the West Midlands will see a 3% increase this year and growth of 18.2% over the next five years.

“Now we have a little more clarity on the political situation we are expecting to see more people make the decision to move house this year,” explained Clive.

“This means of course that we need more properties on our books for buyers to choose from. The data from Rightmove means we are officially the number one estate agent in Leamington’s CV32 and CV31, so it would make sense to choose us to be the ones to help out and get your home sold.

“Would-be buyers are hungry to make the leap and are especially looking for new instructions to the market. Sometimes vendors think it’s best to wait until the daffodils are out to try to sell their home. But actually, traffic on Rightmove and the other portals is high during January.

“So if you’re thinking of moving in 2020, now is an excellent time to get in touch, as we have people waiting for something new to whet their appetites.”

Contact ehB Residential on 01926 881144 or email info@ehbresidential.com for a free market appraisal.

*Data is based on Rightmove statistics for New Instructions and Sales Agreed between January 1 and December 31 2019 on resale only properties in postcodes CV32 and CV31.

"The stress of moving house and renting a property out is enough for even the strongest to endure, however, having bought our house through ehB Warwick and rented out our previous home through them too, I can honestly say things could not have gone any better. The purchase went without a glitch and the whole process took 8 weeks. ehB worked extremely hard to keep all parties well informed and managed everyone's individual needs well.Â They found a tenant for us within a day, who moved into our house upon completion of our purchase.Â We can honestly say that without a doubt we would use ehB in the future and would recommend their services to anyone considering buying, selling or renting a home."
Ian, Louise and George